Photo of Charlie Cousins by Peter Reed
Look out for the next big event for Team GB rowers, which will be the World Cup at Dorney Lake on 21-23 June.
After his stunning 1x win over Alan Campbell on 21 April at GB Senior Trials in Caversham, ex-Robs athlete Charlie Cousins teamed up with Campbell in a scratch quad crew to take 5th on 11 May at Essen Regatta. They came in 6 seconds off the winning crew, which was the Croatia 2012 silver medallists, over a 2km course.
GB Rowing reports that at the Sydney World Cup event on 24 March, men’s quad crew Charlie Cousins, Bill Lucas, Sam Townsend and Graeme Thomas won an historic gold medal, the first of all time at world cup level. 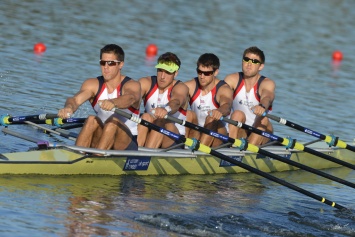 Katie, Callum, Alex and Ben[/caption]
Bella Fowlie and her father won the father/daughter race by a canvas in a straight final
(Sprint race photos courtesy of Susannah Clements)